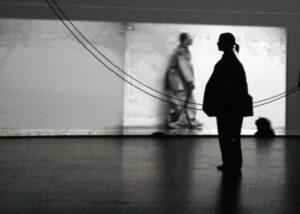 One of three panels of Jasper Johns, a study in performance triggered by the works of the landmark American painter, in June 2008.

“With abstract painting we created a better possibility to approach that which cannot be grasped or understood, because in the most concrete form it shows ‘nothing.’”
– Gerhard Richter

GRAY was inspired in part by Johns’ 2002-3 painting Near the Lagoon. With GRAY I explored theatrical parallels to Johns’ use of gray as surface, subject, and cover.

In Near the Lagoon Johns uses the shapes and arrangement of Degas’ re-assemblage of Manet’s painting The Execution of Maximilian. Johns rotates the arrangement and, after painting in yellow, blue and red, nearly conceals these colors and shapes with short brush strokes of gray. A string hangs loose in a curve in front of the canvas. We can see that something is hidden, protected, or cordoned off, underneath.

I wanted to create a multi-dimensional space, a deep “surface,” on stage that functions the way I see Near the Lagoon function: a surface that speaks quietly of that which cannot be grasped because in the most concrete form it shows “nothing.”

Different performance disciplines can work together like Johns’ paintings dialog between surface and subject. A gesture invested with the specificity of a character’s action and inserted into a neutral movement phrase can result in an unresolved tension between the two. “Nothing” is shown: the subject is tied up in the surface, the theater is tied up in the dance, and it is impossible to pull them apart. In Johns’ work such tension resists resolution – we have to step off from the traces that appear in his work and cross the gap over the unknown ourselves, holding this tension like a handrail.

Something is hidden down below. We can’t grasp it, but we can see that it is there: squirming just below the surface.